By: Walter Adey, Geologist & Curator in the National Museum of Natural History's Department of Botany. Originally published in the ASC Newsletter, No. 22, pg. 33-35. 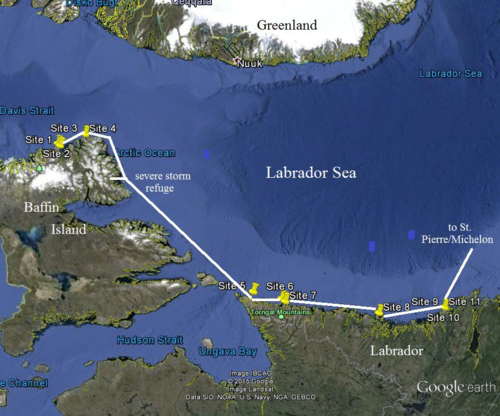 Natural population crashes of Arctic organisms, some related to native peoples, others likely directly or indirectly climate-related, have been documented for many groups of animals. With the on-going concerns for the effects of human industrial activity in the Arctic, as well as the looming, potentially crushing burden of rapid Arctic warming, it is essential that scientists understand climate change as it related to past documented population changes, including human populations. 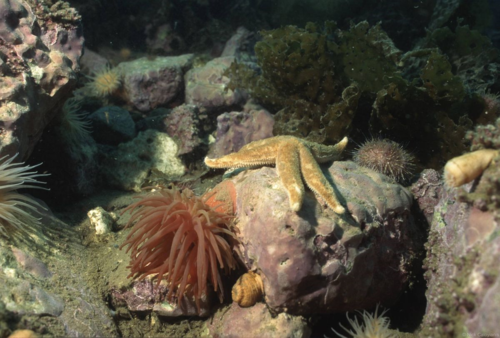 Also, there is little question that industrial pollution in temperate latitudes has affected the Arctic in the past, and is likely to greatly increase with in-situ activity. To fully understand these past patterns and be equipped to deal with newly arising concerns, a climate/pollution time tape is necessary for Arctic waters. Rhodochronology can potentially provide that time tape, in great detail. However, it is necessary that we extend the age and quality of our collections, and the analysis of those collections, back in time. This is required so that we better understand the ecology of coralline communities in the Arctic, and that we have a fuller understanding of the highly complex skeleton and metabolism of the Arctic coralline algae that will provide time tape. 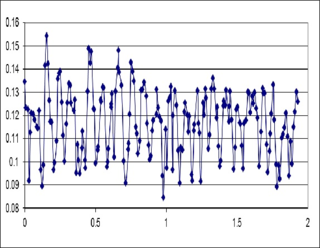 Mg yearly cycling in skeleton of C. compactum from Baffin Is. x-axis in mm.

Coralline archives have allowed us to produce for the first time a detailed marine climate history for the Labrador-Newfoundland shelf that can be related to the history of its prehistoric cultures and modern residents (Halfar et al. 2013). These archives are especially significant in interpreting the periodic southern expansion of Dorset Paleoeskimo and Labrador Inuit cultures whose economy was based primarily on Arctic and Subarctic marine mammals (esp. harp seal and walrus). Coralline proxies indicating southward expansion and longer seasonal persistence of pack ice coverage correspond closely with the appearance in southern Labrador and the Gulf of St. Lawrence of Labrador Inuit culture ca. AD 1400-1600. Extending the marine archive, currently at 1200 years BP, to ca. 2500 years BP would provide a proxy for inferring range shifts and population crashes of harp seal and the large Dorset populations that that 'mysteriously' disappeared from southern waters. 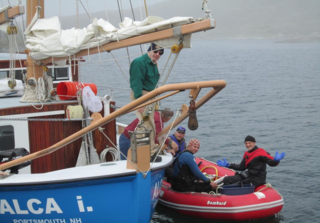 Preparing for a coralline sampling dive from the R/V Alca i. in Labrador.

The rocky, photic benthos of Arctic and Subarctic Biogeographic Regions has a  characteristic seaweed flora that includes an extensive high-magnesium calcium carbonate basal layer of crustose coralline red algae. Species of the genus Clathromorphum are important elements of this crust, and beginning in 1965 it was demonstrated by Walter Adey and colleagues that the Mg component of the high magnesium carbonate skeleton varied seasonally, and could be used as a reliable proxy for yearly thickness and growth rates, in effect a marine, Arctic rhodochronology. By 2005, specimens collected from the Gulf of Maine to Newfoundland had produced maximum ages up to about 200 years BP. Using the R/V Alca i, a 20m floating laboratory, Adey, Halfar and students have been able to rapidly expand more detailed field work to higher latitudes in the Labrador Sea, and by 2012 had greatly expanded climate analysis using SEM, electron microprobe and laser scanning techniques to develop a high resolution climate archive to 1200 years BP.

The 2014 cruise extended our collections and data northwards and contributed to the pool of knowledge that will lead to detailed environmental/ climate archives. 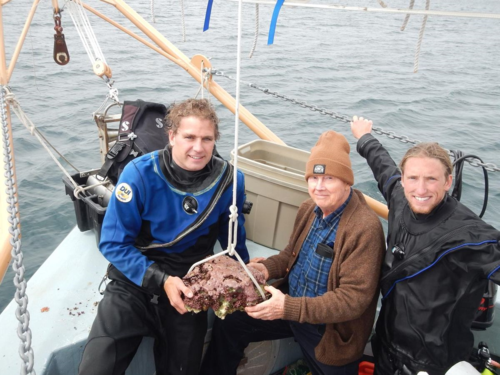