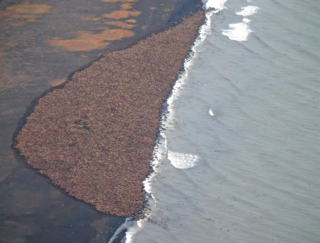 In February 2014, the ASC team received the Smithsonian Grand Challenges Consortia award to implement its multi-disciplinary project Arctic Crashes: Human, Climate, and Habitat Agency in the Anthropocene (see ASC Newsletter 21:19–22, and 22:25-37). The project officially started in March 2014; the $100,000 grant was originally given for 15 months, till June 2015 but was eventually extended till fall 2015, to include the second Arctic field season for the project team. In late May 2014, the first field crew under Aron Crowell headed to the fieldwork in Yakutat Bay, Alaska (see Crowell, this issue).

The ‘Arctic Crashes’ project is aimed at the theme of human-animal relations in the rapidly changing Arctic that is of utmost relevance to scientists, Arctic people, resource managers and agencies, and policy-makers. The field is huge and a relatively small program, such as ours, would never achieve the needed circumpolar coverage and required focus on several animal species that are of critical importance to Arctic people. Therefore, our project from the beginning was organized around several local and species-focused ‘case studies’ in Arctic North America – some in the Western Arctic (Alaska and Bering Sea) and some in the Eastern Arctic and North Atlantic. In summer-fall 2014, four teams went to the field: those led by Aron Crowell in Yakutat Bay (Tlingit historical subsistence hunting of harbor seals), Bill Fitzhugh (historical Inuit and harp seals in Northern Québec), Stephen Loring (Innu and James River caribou herd in interior Labrador), and Walter Adey (Baffin Island to Labrador sea cruise to collect data on bottom coralline communities as proxies to historical sea ice and ocean temperature change). The stories of each of these 2014 field operations are presented in the sections below (Originally published in ASC Newsletter, No 22, see our Arctic Crashes blog posts, where they will appear here). In addition, Alaina Harmon conducted surveys of the NMNH arctic mammal collections at the Vertebrate Zoology and Paleobiology Departments (with the support of our colleagues,  Kris Helgen, James Mead, Charles Potter, Don Wilson, and Nicholas Pyenson – see below). Igor Krupnik summarized historical data on the distribution of the Pacific walrus sub-populations (stocks) in the Bering and Chukchi Seas, from 1825 to the present, assisted by biologists G. Carleton Ray and the late Lyudmila Bogoslovskaya. In all, our studies covered four Arctic species—caribou, Pacific walrus, harbor and harp seal (plus many more in the NMNH osteological collections)—and various groups of polar indigenous peoples, Inuit, Innu, Siberian Yupik, Chukchi, Tlingit, and others, who interacted with them over generations.

In 2015, the ‘Arctic Crashes’ crew is planning to expand its focus, both in terms of field geography, the number of species covered, and the spectrum of indigenous communities to be engaged in our research. We are also seeking to bring more partners—archaeologists,   paleobiologists, historians, indigenous experts, wildlife and environmental managers—to the ‘Crashes’ study. A major step in that direction was undertaken in winter 2015 by Aron Crowell and Igor Krupnik, who jointly planned an ‘Arctic Crashes’ session for the 42nd annual meeting of the Alaska Anthropological Association in Anchorage. The full report on that day-long session on March 5, 2015, with 14 presented papers, covering ten species (polar bear, Pacific walrus, caribou, bowhead whale, white whale, fur seal, sea lion, harbor seal, ringed seal, and salmon), primarily from the North Pacific–Western Arctic area will be published in the next issue of the ASC Newsletter. Following the next field season in summer 2015, we plan to organize another ‘Arctic Crashes’ symposium in early 2016, this time at the Natural History Museum. The second session will be also focused primarily on the Eastern Arctic, i.e. Canada and Greenland, also Northeast Russia. Papers from the two sessions will then be published together in the project’s final collection volume that will be the main product of our two-year study on the changing relations among of Arctic Peoples, Animals, and Climate.