Still Searching for the Trail to Caribou House: Smithsonian-Tshikapisk Research in Ntessinan

Perhaps some of the most evocative descriptions of the interior of northern Labrador –it’s caribou country—are contained in William Brooks Cabot’s Labrador (1920) in the accounts of his intrepid wanderings—sometimes alone, sometimes with a companion or two—between 1903 and 1910.  Entranced by the opportunity to experience something of the traditional Innu caribou-hunting culture, he followed the old Innu travel routes from the coast of Labrador near Davis Inlet to the traditional Innu fall caribou hunting camps on Mistinipi Lake and George River. 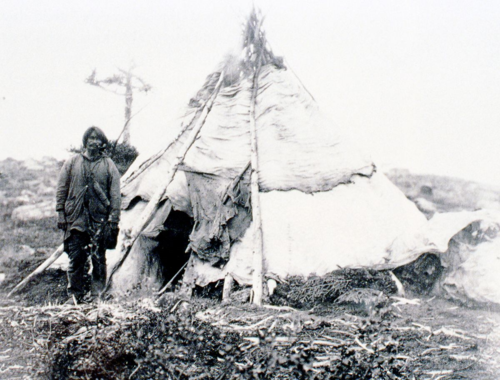 Doubtless Cabot was aware of the old Innu stories about the Master of the Caribou and his mountain home in the northern Labrador barrens. The Innu believe that Caribou House was a hollow mountain where the caribou dwelled when not in the environs of men. Coincidentally its presumed location in the heart of the Torngat Mountains is both the location of the George River caribou herd caving-grounds as well as the source of a lithic raw material that had been used by Indian and Inuit hunters for more than 7000 years. The trail to Caribou House is the metaphor for a collaborative research project that utilizes the converging research trajectories of archaeology, ethnohistory, oral history, and ecology in an exploration of the characteristics and consequences attending a specialized caribou-subsistence economy in Labrador, from its earliest appearance in conjunction with pioneering Paleoindian-Early Archaic hunters down to the present day.

Some of the earliest evidence for the emergence of social complexity among native peoples in post-Pleistocene North America comes from northern Labrador, where elaborate mortuary traditions and large social aggregations appear around 7000 years ago.  It has been suggested that the dependable characteristics of the marine ecosystem formed the subsistence base for these pioneering populations. However recent work in the interior of Quebec-Labrador at caribou-crossing places suggests that the significance of caribou for early hunters has been over-looked.  Archaeological survey and excavation coupled with the observations and knowledge of traditional Innu hunters offers an unprecedented opportunity to interpret the role of caribou predation in the evolution of hunting and gathering cultures in North America and theoretically to contribute to an understanding of the relationship between subsistence practices and the maintenance of social boundaries and identities that figured so prominently in the success of early human societies in both the New World and Ice-Age Europe.

The “summer”/fall 2014 Caribou House Project had two principle objectives: (1) Archaeological documentation of a prominent 19th century Innu caribou crossing camp on Mistinipi Lake that was visited by William Brooks Cabot in 1906, coupled with (2) an intensive site survey of a portion of the Mistinipi Lake basin to document the antiquity of caribou hunting strategies in the Quebec-Labrador barrens. 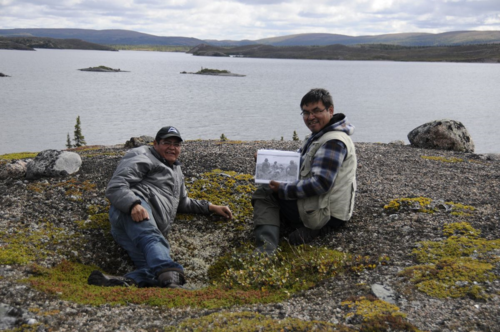 Marcel Ashini (left) and Richard Nuna (right) in the “dug-out”/hunting blind at the 1906 Innu camp on Mistinipi Lake. They hold a photograph taken by William Brooks Cabot of Richard’s ancestor sitting in the exact same place. In 1906, having already speared hundreds of caribou at this crossing place, the men were enjoying watching the stragglers cross over.

Early in September, Stephen Loring, Chelsee Arbour (MUN) and Richard Nuna (Chief Environmental Negotiator with Innu Nation) flew in a chartered Twin Otter (thank-you Air Labrador and Air Labrador’s senior pilot, Lester Powell!) landing on an esker that is a prominent landmark adjacent the river-like northeastern-most extension of Mistinipi Lake. We were soon reunited with our colleagues, Anthony Jenkinson and Marcel Ashini who had arrived earlier by float-plane and who had established a camp adjacent to the 1906 camp that Cabot had utilized.

For a month, weather permitting, we conducted site surveys of the north-eastern arm of Mistinipi Lake, locating eight historic late-19th/early-20th century Innu camps that were contemporaneous –or nearly so—with Cabot’s 1906 camp, and six pre-contact ancestral Innu sites. The latter were all quite small, comprising only one or two hearths and a scatter of Ramah chert and quartz debitage. Situated adjacent to a prominent system of caribou trails, these sites are all interpreted as briefly occupied hunting and butchering sites used by small groups of hunters. 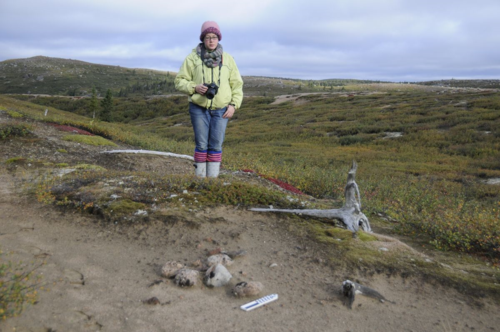 Much of the 2014 fieldwork was directed at documenting the footprint left behind by Innu families in the late 19th century at and adjacent to Cabot’s 1906 camp. His observations and photographs form the only extant eye-witness account of the Innu at their traditional fall gathering caribou hunting camps in the interior of the Quebec-Labrador peninsula. When Cabot arrived at the camp in September, 1906, a small Innu band of 20-25 people, including four men and as many boys in the preceding weeks had speared over a thousand caribou as they swam across the lake narrows!

The 1906 camp, with its detailed historical description and photographs, provides a unique opportunity to compare and ground-truth historical observations with archaeological documentation. In addition to locating, mapping and photographing the historic Innu sites, including stone caches and hunting blinds, we were able to excavate several structures including a possible shaking-tent locality and a pair of circular tent-rings–the remains of tastueikantshuap—and a portion of their associated “middens”. I put middens in quotation marks since an underlying tenet of traditional Innu culture was the ceremonial and ritual attention to all aspects of the disposal of animal (especially caribou) remains, which were certainly not deposited haphazardly. The assemblage from these sites attest to the relative self-sufficiently of Innu families who, while they had limited access to sources of European goods (rifle cartridges, seed beads, and tobacco paraphernalia), still maintained their independent life in the interior of Nitassinan. 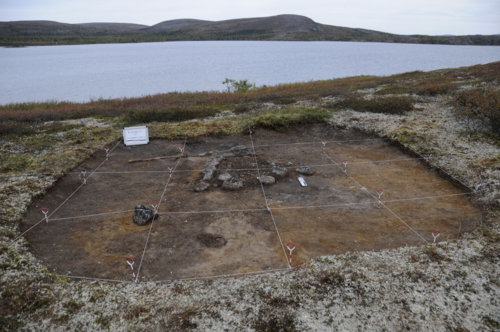 Previous field-seasons at near-by Kamestastin and Border-Beacon had lingered on through mid-October. Not only is this a very beautiful time to be in the country, with its relative absence of mosquitos and black-flies, and the astonishing beauty of the tundra’s fall colors; it is also the time when the caribou pass through on their autumnal migration. However this year it began snowing on September 22nd and barely let-up for the next ten days, bringing a precipitous conclusion to archaeological fieldwork and posing a great challenge to Lester Powell in retrieving us from Torngat’s frozen embrace. 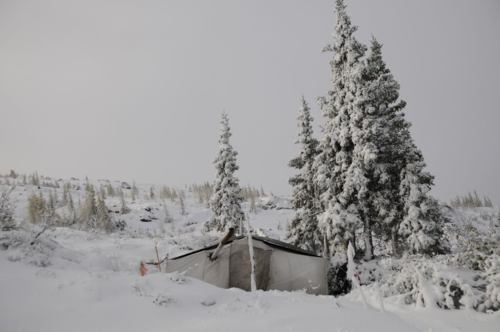 September 22: “Hard to do archaeology when there is a 60cm sterile white layer over everything.”

Arguably the most significant development in northern anthropology in the last decade has been the commitment to conduct research within a community paradigm, one that recognizes the potential of “traditional indigenous knowledge” and oral history to provide an important balance to the perspectives and research strategies of scientific investigators. The Arctic Studies Center has been at the forefront of this movement and is widely recognized for its leadership role in initiating community-based research throughout the circumpolar world. Since 1999 the ASC has been conducting research in close collaboration with the Innu Nation and Tshikapisk Foundation. In addition to conducting important archaeological research on the nature of  Innu and ancestral-Innu land-tenure and caribou predation in northern Labrador, the community goals of the program include working with Tshikapisk educators and Innu elders to systematically document and record the ecological knowledge of elderly Innu hunters and their wives pertaining to the behavior and ecology of the barren ground species, including caribou, bear, and wolverine that are derived from a life-time of observation and from oral tradition. 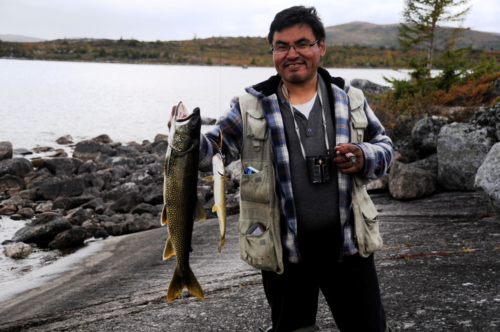 This research has the potential to significantly influence our understanding of the social and ecological landscape of the earliest hunting peoples in northern North America.  It is a unique opportunity to reveal the nature, significance, and consequences of caribou predation not only in Labrador but, by analogy, to early Pleistocene hunters in North America and Europe.

The 2014 fieldwork at Mistinipi was made possible by financial support provided by a Smithsonian Institution Scholarly Studies Award in the Arts and Humanities and by the Innu Nation. We are further appreciative of the Innu Nation for allowing Richard Nuna to accompany the team to Mistinipi. His and Marcel Ashini’s contribution to the success of every aspect of the project was gratefully appreciated. Fieldwork was conducted with a permit from the Québec Ministère de la Culture et des Communications, thanks especially to Valérie Janssen.  And thanks once again to Lester Powell for his intrepid craftsmanship in all aspects pertaining to Twin Otters; I’ll never forget his remark upon his second landing at the Mistinipi esker, with the clouds down on the ground, “Gee, kinda hard to land when you can’t see anything,” and for getting us airborne, which necessitated driving through a snow bank and climbing out of a kettle hole… and that’s another story for another time!