Fieldwork on Alaska Native subsistence hunting for harbor seals (Phoca vitulina) and on the historical population dynamics of this species was conducted at Yakutat Bay, southeast Alaska, during May – July, 2014. The work included interviews with Tlingit seal hunters; video documentation of two seal hunts in the ice floe pack near Hubbard Glacier; bio-sampling of seals taken during the hunts; historical and archival research; and archaeological excavations at the Old Town site (A.D. 1500 – 1750) where a large sample of well-preserved seal bones dating to the Little Ice Age (LIA) was recovered.  Archaeological and ethnohistoric data recorded during three years of National Science Foundation-funded research (2011-2013) are also being incorporated. 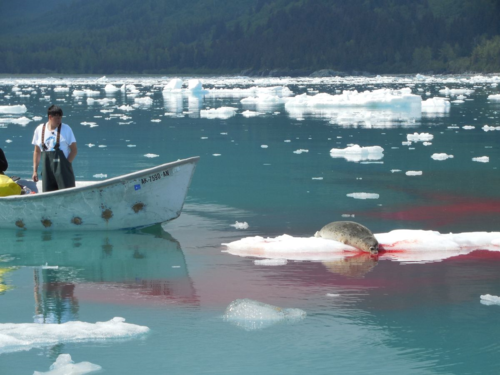 Yakutat Tlingit seal hunters in the ice floes near Hubbard Glacier, May 2014

An initial assessment suggests that seals have always been the most important wild food resource for the residents of Yakutat. Today the subsistence harvest is higher there than in any other Alaska Native community (255 killed in 2012). However, both the resident seal population and the numbers hunted have varied greatly over time. Prehistoric harvest levels have not yet been estimated from archaeological data but it is unlikely that the pre-contact Eyak/Tlingit population of 300 – 400 people, using bone-tipped harpoons, put significant hunting pressure on a seal population that must have been many times larger than at present. 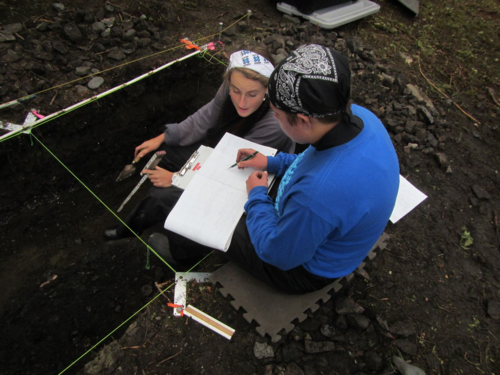 Seal hunting intensified greatly in the late 19th century, spurred beyond subsistence needs by a growing commercial market for seal skins and the availability of breech-loading rifles. It appears that 3000 or more animals were being killed each year by Yakutat hunters during the 1880s – 1890s, based on scant data culled from historical accounts. Even greater numbers were taken during the bounty hunting era (1927-1972) when commercial salmon fishing interests promoted large scale slaughter of the animals. Government bounty data indicate that on average over 10,000 harbor seals were shot per year in southeast Alaska from the late 1920s through the 1960s, a large but as yet unknown proportion of them at Yakutat Bay. A boost in the market value of seal hides during the 1960s may have pushed the number even higher. The fact that annual takes of this magnitude could be sustained for decades suggests that the original seal population at Yakutat must have been very large, perhaps in the range of 35,000 – 50,000 animals, with substantial numbers also found at nearby Icy Bay and Dry Bay. Yakutat elder George Ramos, Sr. remembers that in the 1960s the ice floes were “black with seals.” 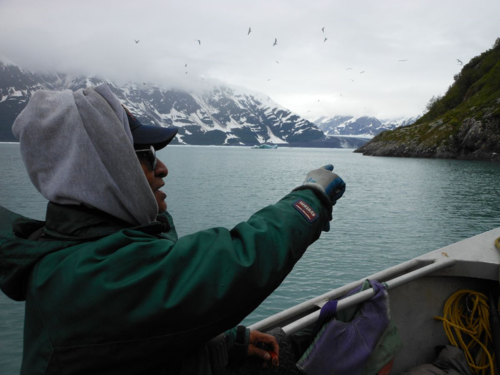 It is therefore significant that the well-documented population crash of harbor seals that has taken place across southern Alaska in recent decades (60-70% since the 1970s) occurred after the commercial and bounty hunting eras ended. Today the harbor seal population in Yakutat Bay is only about 1700. The modern crash cannot be attributed to Alaska Native subsistence hunting that since 1972 has accounted for only a small fraction of the numbers of seals that were being taken annually throughout the late 19th and early 20th centuries.  An alternative explanation, based on the impact of warming sea temperatures and changes in the marine food web is under consideration by marine biologists. The Yakutat research will contribute to this hypothesis by providing baseline data on LIA sea temperatures derived from O18/16 ratios in marine bivalves excavated at Old Town and other archaeological sites. In addition, the DNA of modern Yakutat harbor seals (sampled in 2014) will be compared to DNA extracted from historical and archaeological specimens (bones and teeth) to monitor the in-migration of animals from other Gulf of Alaska subpopulations, which may have had a substantial effect on maintaining high numbers in Yakutat Bay. 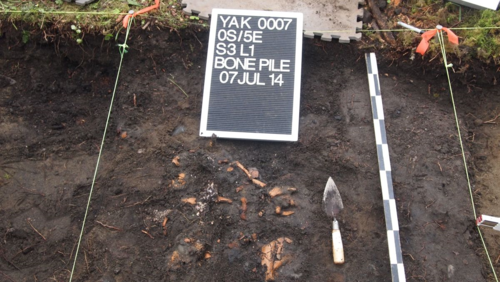