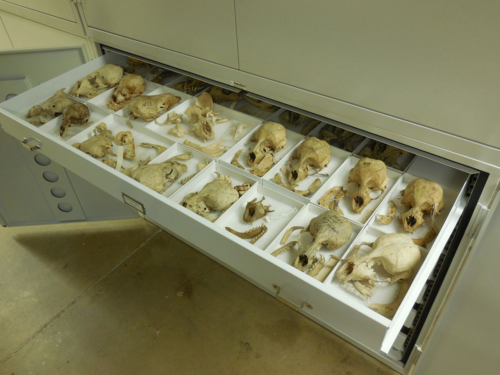 In addition, attached copies of select papers and reports provide immediate access to literature utilized in making stock assignations. Cultural assignment includes images of ledger pages, artifacts, data cards, field book pages, and more pulled from the SI Collections Search Center which represent a match between the assigned culture and any of the database species. Examples include a carved whale, a fiddle with bowhead whale baleen utilized in the bow, a page of Aleut names for whales taken from one of William Dall’s field books, and more. These images are meant to suggest the rich potential for institution-wide cultural, scientific, historical, and art historical Arctic species studies. The database promises to provide information rich for interdisciplinary research. 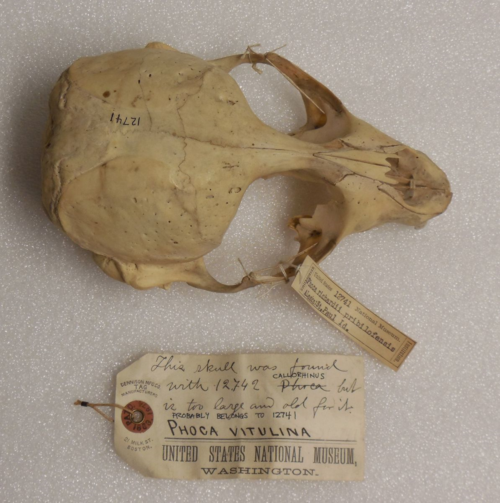 Phoca vitulina (harbor seal). This is a good example of the different types of data stored with the specimen itself--labeling on the bone itself and multiple types of paper labels. This one was collected by H. W. Elliott at St. Paul Island, the Pribilof Islands, Alaska.

Beginning in May 2014, I also collaborated with Dr. Aron Crowell concerning harbor seal skulls in NMNH collections from Yakutat Bay, Alaska..  It was instigated by a conversation concerning the potential for sampling genetic material from Alaskan harbor seals during Aron’s ongoing fieldwork in the Yakutat Bay area (see ASC Newsletter No. 22).

This conversation, as well as initial P. vitulina survey findings, inspired Aron to seek out the opportunity to work within an existing marine mammal collection permit in partnership with the Burke Museum in Seattle, Washington, to collect fresh P. vitulina heads from the Yakutat Bay area for genetic sampling. Initial osteological surveys also revealed the presence of three Yakutat Bay P. vitulina specimens from the Harriman Alaska Expedition in 1899, a time which had previously been unrepresented by P. vitulina remains at Crowell’s field site. When asked by Crowell to examine these skulls for presence of bullet damage, I sought the expertise of NMNH forensic anthropologist Kari Bruwelheide for her knowledge of key projectile osteological damage indicators, including radiating fractures and beveling surrounding entry and exit wounds. No bullet wounds were found on the 1899 Yakutat Bay specimens, although X-radiography can conclusively confirm or deny bullet damage.

Since that time, I also provided Crowell with photographs of the Harriman Alaska Expedition specimens, and conversed with zooarchaeologist Dr. Mike Etnier, working in partnership with Crowell, and NMNH collections manager Charley Potter. They provided information on previous examples and results of harbor seal genetic sampling in the NMNH collections and direction on destructive sampling application protocol.

Another area of potential interest is noted Smithsonian archaeologist, Henry Bascom Collins (1899–1987), who contributed significantly to USNM Mammal collections. A simple search of specimen data, reveals 473 specimens collected by Collins. Of these, 12 bowhead specimens, 12 walrus, and one harbor seal were collected at St. Lawrence Island, Alaska, variously listed as being from Miyowagh, and Kialegak sites at the northwestern and southeastern tips of the island, respectively.

Accessing Collins’ field books and papers in the Smithsonian National Anthropological Archives may provide insight into the context of these specimens. How many of these specimens were found in archaeological context? If it is possible to correlate a specimen to an archaeological record, what can be learned from its context? By virtue of their site location and stratigraphy, can these specimens be related to the ‘layered’ ethnographic landscapes that Igor Krupnik describes in his chapter on Gambell in the Northern Ethnographic Landscapes volume (2004)? If so, these specimens become indicators not only of morphology and species distribution, but of cultural practices ranging from hunting and prey disposal to architectural design.

Case studies such as this, if successful, make an argument for exploring early biological specimen collections for archaeological materials. These particular specimens would occupy their own liminal institutional status, being both embodiments of potential biological knowledge and records of human cultural activity, granting them a unique status as data and object of narrative. Theoretically, all museum specimens hold this status, as a record of their institutional histories and structures, of preparation and material histories, and as a record of their use and meaning to researchers, the public, collection managers, and others who interact with them and with the information surrounding them. Data collection itself is in a sense a narrative act. However, archaeological context makes this narrative component more explicit, and provides an optimal intellectual gateway to the reminder that biological specimens are indeed cultural artifacts. Similarly, many cultural artifacts are, in part, biological specimens.

Departmental divisions provide ease of access and care, as individuals such as curators and collection managers develop specialties within these named fields of expertise. However, data integration provides the opportunity to view specimens which may be physically and curatorially divided across an institutional whole. Tools such as NMNH’s eMU database provide an optimal search environment to permit the interested public, researchers, and museum specialists the ability to develop new comparative studies. However, they frequently act instead as “gated communities,” with each division having its own data organizational structure.

Collins’ specimens invite us to ask questions not only of their context in Alaskan ecological and cultural histories, but also in our own cultural histories and present and the stories and studies we favor and obstruct through disciplinary divisions and data management. 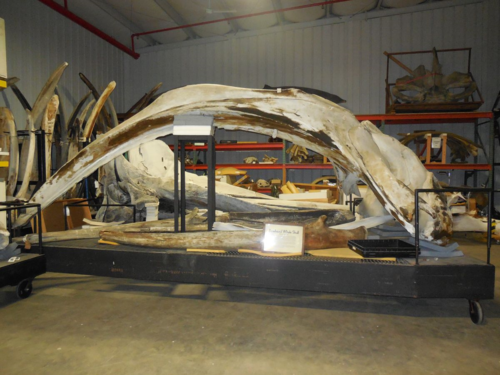 The cranium of a bowhead whale (Balaena mysticetus) from "Point Barrow, 5 miles off Iglurak Island." Collected by J. A. Ford in 1931, assistant to Henry B. Collins in Alaska, 1931-1932. (Note: Iglurak is apparently Cooper Island, according to a 1919 USGS publication The Canning River Region Northern Alaska by Ernest de K. Leffingwell.)

One way to begin to approach the nexus of cultural and biological data in a faunal object is through individual object history. Collection and preparation leave their traces on osteological specimens. Tantalizing hints of these actions appear in the departmental ledgers, written at the time that specimens are assigned catalog numbers. For example, one skull is listed as having been “destroyed by action of pickle” while other skeletal components are listed as “pick up,” which appears to indicate found remains. What chemical process was applied to and destroyed the skull in question? What taphonomic indicators are visible on the “pick up” specimens? Is there indication of scavenging or decomposition of bone which may suggest the specimen’s environment following time of death?

In the past, collectors have employed a variety of methods of removing flesh from a specimen’s skeleton in the field. These include burial of the specimen and trailing behind a ship to permit waterlife to clean the remains. Each of these activities will leave a record in bone. This offers great potential for comparing collection and preparation histories to skulls in the NMNH collections. Taphonomic indicators may provide a view into which specimens were likely to have been collected or prepared by individuals of particular professions or groups, as well as into factors such as soil or water chemistry in the area of death, potentially leading to further confirmation of or doubt regarding specimen locality. The NMNH Arctic mammalian skulls provide a wide range of natural (taphonomic) and additive (preparation) factors which may be considered in a non-destructive survey relating taphonomic studies to museum collection, preparation, and environmental history, highlighting the human history and construction of natural history objects.

A multitude of opportunities exist to intellectually expand upon this project. Examples include increased digitization of collections data such as a bone by bone inventory and specimen tag photography, as well as correlation with Arctic mammal artifacts, depictions in fine and decorative arts, and related craft and industry artifacts, such as whaling implements, found throughout Smithsonian Institution collections and archives.