Yuungnaqpiallerput (The Way We Genuinely Live): Masterworks of Yup'ik Science and Survival – A Retrospective

The Bering Sea coast is a sparsely inhabited bit of the sub-arctic Tundra. Despite this, the Yup’ik people have made their home there for centuries. The sophisticated design of their tools allowed the Yup’ik people to live in an area that no one else would inhabit. Despite having no word for science, the Yup’ik people’s tools, containers, weapons, watercraft and clothing were and are very scientifically advanced. Objects from 13 major US and European collections were used to explored the scientific principles and spiritual values that allowed the Yup’ik people to survive in the harsh environment they made home. The exhibit reveals the creative and inventive nature of the Yup’ik people in the past and looks at how their traditions influences their lives today. In recognition of the fifth anniversary of this exhibit I caught up with the curator Dr. Ann Fienup-Riordan to talk to her about her memories of this exhibit. 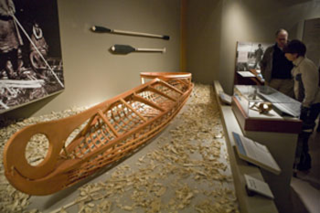 A:  My favorite part of the exhibit was working with such knowledgeable elders and younger Yup’ik men and women who were learning along with me.

Q: Did you learn anything particularly unexpected while you were working on this exhibit?

A: I learned many many new and unexpected things—for example, how seal oil mixed with moss and left in sunlight becomes as strong as Epoxy; how one can make tools and clothing that fit perfectly by using one’s outstretched arms, fingers, and hands as standards of measurement; how putting one’s ear against a the handle of a paddle allows one to hear sounds underwater. Men and women had to learn so many things to live in southwest Alaska.

Q: What can we learn from the Yup’ik people’s culture?

A: I think the Yup’ik view of the world as responsive to human thought and deed is among the most profound things elders teach. This view is evident in many ways. For example, when they say, “The world is changing, following its people,” they are drawing our attention to the fact that not only human actions in the world, but human interactions, affect us all.

Q: Is there anything else you particularly want to share about this exhibit?

A: Not only do Yup’ik people know a great deal about living on the land and sea, they generously share this knowledge. Their generosity of spirit is their greatest gift.

This wonderful exhibit may no longer be on display here at NMNH but the content is available online at http://www.yupikscience.org/.