By Emily Cain and David Rosenthal.  Originally published in the ASC Newsletter, No. 23. 40-41 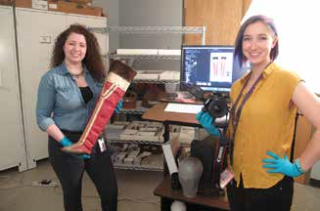 Emily Cain (left) and Brittany Hance (right) in the Department of Anthropology's Imaging Lab at the Museum Support Center.

The summer of 2015 saw the beginning of the Department of Anthropology’s Collections Management Unit’s Arctic Ethnology Imaging Project. The goal of this project is to photograph and make available online the entire NMNH Arctic Ethnology collection of over 20.000 objects.

Funding for the first project year (2015/2016) came from the Smithsonian Collections Care and Preservation Fund (CCPF) created in 2006 as an institution-wide pool to accomplish a wide variety of collections-related projects. The CCPF has funded 181 projects since its inception, totaling over $19 million awarded. Jake Homiak, former Anthropology Collections and Archives Program Director, and David Rosenthal, Anthropology Collections Manager, worked on the first grant proposal in summer 2014 together with the support of Igor Krupnik, Arctic Ethnology Curator.

Receiving the funding has allowed us to hire Brittany Hance and Emily Cainto see this project through. Brittany is a professional photographer and former intern with NMNH Photo Services. Emily, with a Master’s Degree in Museum Studies from GWU (2015) has worked as a SIMA (Summer Institute in Museum Anthropology) intern and contractor. Brittany and Emily primarily work out of the Anthropology Collection Lab’s photo studio at the Museum Support Center (MSC) in Suitland, Maryland. It is equipped with an in-studio Mac Pro shooting computer, a Canon T6s camera with 24-70 EF lens, and Capture One 8.3 software, allowing for a streamlined process and high-quality product. Objects are tracked electronically, using a digital bar-code reader and color-coded system that records at exactly which step in the process each individual object is. Using these and other tools, they’ve modified the imaging workflow so that images are added to the online database almost as fast as they are taken while also minimizing human error.

Each object from the collection, ranging from Edward Nelson’s 1879 ti-sikh-puk dance mask from Western Alaska to Greenlandic souvenir tupilak figures of the 1960s, are carefully and thoroughly photographed, providing a highly detailed and readily accessible visual record to go along with existing catalog records. 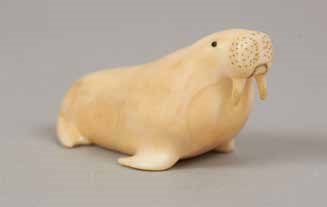 The wide variety of materials within the Arctic collections presents certain logistical challenges; namely, the execution of an efficient system despite the breadth of shapes, sizes, and compositions of objects. In order to navigate this issue, the photo studio has been redesigned with fully modular and mobile shooting and staging areas, allowing for maximum flexibility to suit the needs of individual objects. Additionally, a series of specialized, supplemental photoshoots are planned for objects that fall outside of the capabilities of our main studio.

In collaboration with NMNH Photo Services, two weekend photo shoots have been completed to date in order to accommodate oversized objects such as large parkas and blankets. These objects’ size and, often, age require a much larger staging space and many careful hands. These photo shoots, conducted with the gantry system in the street at MSC, involve experienced volunteers to help facilitate the handling of very large objects, as well as the presence of two photographers for a combination of overall and detail shots with maximum efficiency. In order to manage extra-long objects such as spears and paddles, a new shooting process involving linear motion positioning is in the works for the coming summer. 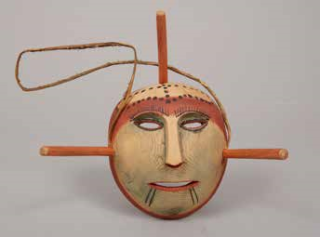 To date, we have photographed more than 2,800 objects and produced over 14,000 images. The majority of objects that belong to St. Lawrence Island Yupik and Nunivak Island Yup’ik/Čupik cultural groups have been photographed and inserted into the database, as well as the collections of Lucien M. Turner and Charles Francis Hall for Labrador and Arctic Canada/Greenland, respectively. The collections database is being updated with the outcomes of the project on a regular basis, with hundreds of new images being made available to both internal users and the general public each week.

We are currently waiting for the Smithsonian to announce the 2016 recipients of the CCPF awards and have high hopes to be funded for year 2 of this project. It will include the imaging of the Kotzebue Sound, Northwest Alaska, and of our smaller Siberia collections. Overall the project is expected to take four years to complete. In that time, Brittany and Emily plan to continue improving their process and to document it for future implementation across other in-house Anthropology digitization projects.