By Amy Phillips-Chan, Director of the Carrie M. McLain Memorial Museum.  Originally Published in the ASC Newsletter, No. 23. 55-57

For almost 50 years the Carrie M. McLain Memorial Museum has perched a few yards from the icy coast of Norton Sound on historic Front Street in Nome, Alaska. In 1967 the Nome Museum, among other museums, including the Cordova Historical Museum, Pioneer Museum (Fairbanks), and Alaska State Museum (Juneau), sprung up across the state to celebrate the centennial purchase of Alaska from Russia. The centennial museums represented a concerted statewide effort to gather and preserve Alaska history and culture while at the same time they announced the importance of Alaska collections and researchers to the professional field.

In Nome, local historian Carrie M. McLain had embarked on a lifelong pursuit of collecting and sharing oral histories, photographs, and artifacts since her arrival on the fringe of the gold rush in 1905. McLain’s founding collection of ivory artwork and historical photographs set a precedent for donors with personal connections to Nome and the surrounding region looking to return their treasures and memories. The museum collection greatly expanded over the past five decades and now comprises 15,000 objects, 12,000 photographic prints and negatives, and over 100 linear feet of historical records. 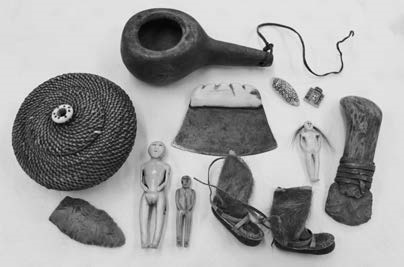 Tools, ivory carvings, a pair of model boots, and a baleen basket from the Lopp Collection donated by great-grandson Stuart Dick in May 2015. CMMM, Acc. 2015.4.abøgarður, Faroe Islands.

The museum’s greatest collection strength is Alaska Native material culture from the late 19th century, followed by items related to gold mining, the ivory curio market, ancient ivory carvings, and dog sledding. The collection also comprises a fair number of business and household articles from early 1900s Nome as well as cultural artifacts and faunal remains from the Snake River Sandspit site. The overall collection affords unique insight into the socio-cultural and economic shifts occurring within Bering Strait communities at the turn of the 20th century.

The Lopp Collection of bone and ivory implements, stone tools, models, and ivory curios represents one of the museum’s distinct assemblages portraying transculturation. William Thomas “Tom” Loppand Ellen Louise Kittredge Loppserved as missionaries, teachers, and reindeer superintendents in Wales between 1892-1902. The Lopps participated in subsistence activities, took photographs, and printed a newsletter, The Eskimo Bulletin, which chronicled daily life within an Iñupiaq village. The growing presence of gold miners in the area and ensuing changes to the local economy are captured in Kathleen Lopp-Smith’s, Ice Window: Letters from a Bering Strait Village, 1892-1902 (2002).

By the time of the Lopp’s departure from Wales in 1902, the town of Nome had swelled to almost 20,000  people, Western goods were prevalent, and the ivory curio market was in full swing. The Shields Collection provides an example of positive cross-cultural relations with Iñupiaq families in transition and a variety of items produced for the tourist trade in Nome. From 1910-1918, Walter C. Shields served as Superintendent of Schools

Ivory artwork from the Shields Collection donated by grandson Philip Shields in April 2015. The reindeer and figure stand on top of the tusk inscribed, “To Walter C. Shields, Superintendent 1916. Nome, Alaska. From, Wales Delegates.” CMMM, Acc. 2015.2

of the Northwest District of Alaska. Shields oversaw the establishment of new schools and advocated for the promulgation of reindeer herding as a means to increase Iñupiaq wealth and standing. During his treks to northern communities by reindeer sled, Shields took photographs, acquired objects, and framed his view on Iñupiaq history as a book of poems titled The Ancient Ground (1918).

In February 2015 I came onboard as Director of the Carrie M. McLain Memorial Museum as it stood on the cusp of its own significant transformation with construction of a new building, new exhibits, and its first dedicated collections storage area. Like many small museums, lapse in staff and lack of training over the years had resulted in a disorganized and poorly documented collection. The use of multiple numbering systems, a lack of accession records, and dearth of deed of gifts, presented an impressive challenge. Indeterminate portions of the collection were also stored in seven different locations across town adding another layer of organizational complexity.

In spring 2015 the museum undertook its first comprehensive inventory in fifty years. For those who have processed collections, one is intimately familiar with the meticulous task of searching for documentation, identifying, attributing, and cataloguing. Opening unmarked boxes and exploring collection hideaways also carries a heady sense of excitement and discovery. One remarkable object found folded in storage is a tanned and dyed sealskin wall hanging featuring alternating light and dark squares of intricate geometric appliqué typically found on 19th century Chukchi clothing from Eastern Siberia. 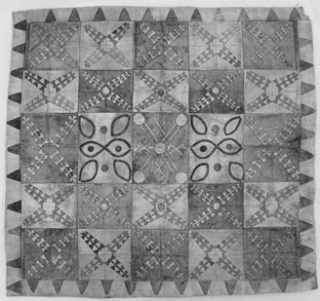 For our museum, the comprehensive inventory served a manifold purpose. First, the extensive processing activity helped us establish right of ownership while gaining critical insight into the scope and strengths of our collection. Knowledge about the range and dimensions of objects was also instrumental in planning the layout of cabinets and shelves in our new collections storage area. Next, after objects were catalogued and photographed they moved down the line to where they were wrapped and boxed for the move to the new museum. Finally, hands-on analyses of the collection afforded an opportunity to visualize new exhibit themes and identify key objects for storylines.

The museum collection will embark on its next journey during summer 2016 as it moves approximately one mile north to our new facility. Rehousing the collection in mobile storage will greatly increase the accessibility of the collection and expand its potential value for research, public programs, exhibits, and community projects. Following the move, the museum will be rolling out a “Community Historian” program as an integral part of exhibit development for the main gallery. The program invites community members with localized knowledge to partner with museum staff and draft exhibit content utilizing materials within the collection.

The Carrie M. McLain Memorial Museum contains a rich assemblage of artifacts, photographs, and papers that reveal the vibrant history of Nome and the Bering Strait, from marine mammal hunting equipment and ivory artwork, to gold mining and the origins of long distance dog sled racing. Through many personal donations and accounts, the collection offer critical insight into the shared history of Western and Bering Strait Native peoples that continues to enrich the cultural fabric of Nome.