By: Schuyler Litten and Chelsi Slotten

Last Tuesday, October 25th, we had the pleasure of hosting the Arctic Fulbright open house in the Ocean Hall of the National Museum of Natural History.  We welcomed 17 Fulbright Arctic Initiative Scholars from Canada, Denmark, Greenland, Finland, Iceland, Russia, Norway, Sweden and the US.  Their research was complimented by the Arctic Youth Ambassadors who joined us to discuss their experience of life in the Arctic. Representatives from Alaska Geographic, the U.S. Fish and Wildlife Service, Dartmouth College, University of Alaska Fairbank, the U.S. Department of State, the National Geographic Society and the Institute of International Education were also present. 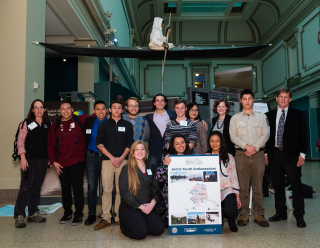 The program engaged visitors of all ages with current research on the impact of climate change on Arctic ecosystems and communities.  Over the course of 3 hours the public interacted directly with experts at 24 stations around the Sant Ocean Hall. Dr. Noor Johnson highlighted the need for more community-led research and involvement with offshore development in Canada, while Dr. Maria Tysiachniouk discussed how to balance the interests of oil companies and indigenous populations in the Arctic. Dr. Øystein Varpe talked about his research observing the relationship between Arctic sea ice and its effect on ecological systems. A few examples are the changes in growth rates among different species and shifts in hunting abilities or patterns due to increased light from receding ice. Itty Neuhaus, the only Fulbright artist, explained the development of her installation. It reflects on the nature of icebergs and their real representation of climate change along their symbolic representation of changes within ourselves. Her 3D printed models of icebergs were created to match their density and behavior in water. Dr. Tamara Harms discussed her research on Arctic freshwater ecosystems and the effects climate change has on areas with significant permafrost melt. Bill Fitzhugh the Director of Arctic Studies and Stephen Loring an Arctic archaeologist had artifacts from our own collections available for the public to interact with. They were used as teaching aids and examples of arctic culture and art. 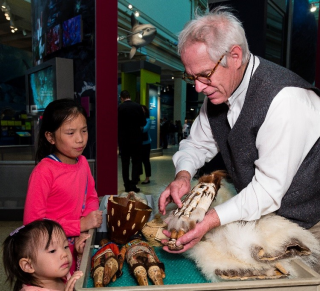 The importance of involving locals and arctic youth in this conversation was showcased by the presentation of several Arctic Youth Ambassadors who talked about a wide array of subjects relating to their lives in the arctic. One of the Youth Ambassadors, Willie Drake, presented on traditional Yup’ik housing. He discussed the traditional building materials along with functional and cultural uses in relation to their modern counterparts. Jannelle Trowbridge discussed her experience mushing (dog sled pulling) in Alaska with her family.

This open house contributed to the public understanding of the Arctic and stressed the need for continued research in the Arctic. The participation of so many scholars, professionals, and locals highlights the interconnected nature of the Arctic nations, both to one another and the broader world.  Many thanks to all those who participated, both as experts or visitors, and to the Fulbright Arctic Initiative for providing their generous funding of Arctic scholarship.