It’s been quite a year here at the Arctic Studies Center.  We started off with a workshop on animal crashes in the Arctic in early January and have kept busy ever since.  Scholars from across the US, Canada, and Europe joined us to look at how human-climate-animal interaction has impacted animal populations in the Arctic.  We were very fortunate to hear from Enookie and Charlie Inuarak, two hunters from the Canadian Arctic community of Pond Inlet.  They spoke eloquently on the how the Inuit relate to animals and the importance of understanding and preserving this bond.  Prior to the workshop, we hosted the Ernest “Tiger” Burch Memorial Lecture.  Dr. Morten Meldgaard, past director of the Natural History Museum of Denmark, spoke on the close relationships between animal crashes and human economies with an eye towards how humans have impacted animal populations, which then impact human populations, over time. 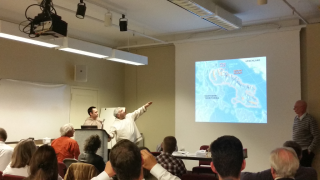 Our year continued with work on the upcoming exhibit Narwhal: Revealing an Artic Legend, which will open later this year, and collaborating on the Folklife Festival.  This year’s festival focused on the Basque population.  Dr. Fitzhugh has found evidence of Inuit-Basque interaction in Northern Canada during the 17th century, including evidence of potential cooperation between the two populations.  Several events during the 2 week festival focused on the archaeological evidence for the Basque’s in Canada.  The Festival was a huge success, and we greatly enjoyed being part of it and working with Basque artists and ship-builders.

Following the festival, Dr. Fitzhugh made his annual research trip to Newfoundland, Labrador and Quebec, where he and a group of researchers conducted archaeological survey work and continued excavating the Hart Chalet Inuit site.  This seven week trip was punctuated by presentations at local museums and meetings with indigenous groups to discuss our findings and learn what information the locals were interested in exploring further.  These meetings were highly informative for all, and highlight the importance of working with local communities when undertaking archaeological work. Upon our return to Washington DC, we hosted a reception for the White House Arctic Science Ministerial.  Dr. Krupnik was key in working with the Arctic Science Ministerial to organize this event, which was attended by representatives of all eight Arctic Nations and members of the Arctic Council.  We debuted a series of new banners that highlight the history of Arctic scholarship at the Smithsonian.   Our international collaboration continued with the Fulbright Arctic Scholars Week Open House on October 25th.  This program hosted 17 Fulbright Arctic Initiative Scholars from all around the world and several Arctic Youth Ambassadors.  A breadth of experiences, ages, and academic disciplines came together to highlight the importance of Arctic research today and moving forward. The program’s highlight was the scholars’ presentation of their research work to the visiting public in the Ocean Hall. 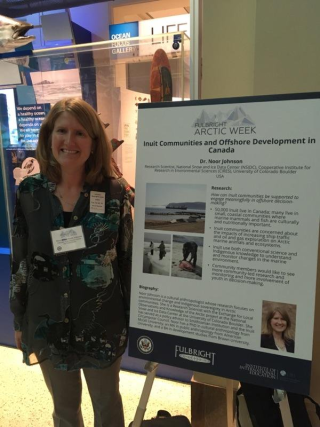 We rounded out the year with a workshop on the importance of increasing accessibility and awareness of Arctic archival collections arranged with the Jefferson Institute and Library of Congress.  This was, once again, an international affair with scholars from the US, Canada and Europe participating.  The breadth of information available of the Arctic is really astounding and digitization efforts have and will continue to make this information more available.

This year has been filled with collaborations, meeting new colleagues and progress towards understanding this wonderful area we have chosen to research.  We are, as always, excited to continue to learn and ready to face whatever the New Year brings.  Wishing you all the best from all of us here.  Happy New Years!