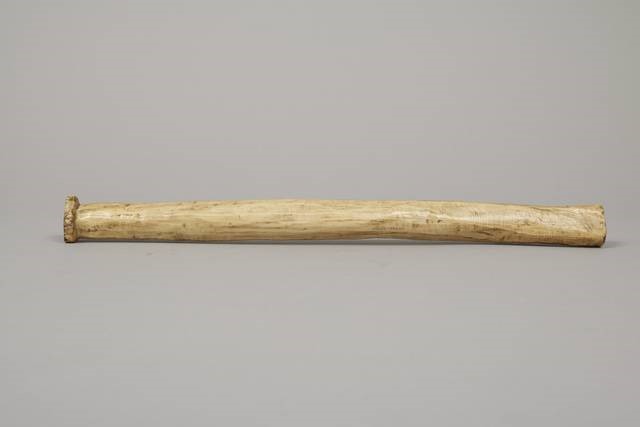 Intrepid explorer Captain Charles Francis Hall collected this Inuit drinking tube, carved from a narwhal tooth during one of three Arctic research expeditions he conducted during his lifetime. There are a number of objects in our collections that are made of or contain narwhal ivory. The material is very versatile and was used by the Inuit to make everything from belt buckles to decorative figures.

Motivated primarily by a desire to determine what became of Sir John Franklin’s 1840’s lost Arctic expedition, Capt. Hall initially headed north to find evidence of the crew’s fate. Along the way, and accompanied by a host of scientists and researchers, Capt. Hall interacted with Inuit people and collected both information and objects illustrative of indigenous life in the Arctic region. In 1865 Hall published an account of his first expedition, Life Among the Esquimaux: Being A Narrative of An Expedition In Search of Sir John Franklin In The Years 1860, 1861, and 1862, which offers an interesting look into the people and places Hall encountered on his first expedition, during which he discovered not Franklin’s expedition, but Martin Frobisher’s second while searching for a Northwest Passage to China.. Unfortunately, Capt. Hall’s final expedition was seemingly doomed—Hall himself died on board his ship off the coast of Greenland, and the remaining crew became stranded and were forced to shelter on an ice floe for over six months until being rescued.

In total, Capt. Hall’s collection donated to the museum in 1871 consists of over 60 objects of various materials and purpose, collected in or near the Arctic. Capt. Hall’s endeavors invite us to think about how the motivations, resources, and practices behind the history of Arctic exploration shapes the knowledge we now have about the region and the peoples who have lived there successfully for centuries. Objects such as this seemingly non-descript drinking tube offer insights into how indigenous Arctic communities harvested and used materials, such as narwhal ivory, that are considered highly precious in other parts of the world.

To hear some Inuit perspectives on indigenous connections to the narwhal, check out our new exhibit “Narwhal: Revealing and Arctic Legend” which opened August 3rd!