An Archaeological Discovery in Cake and Chocolate 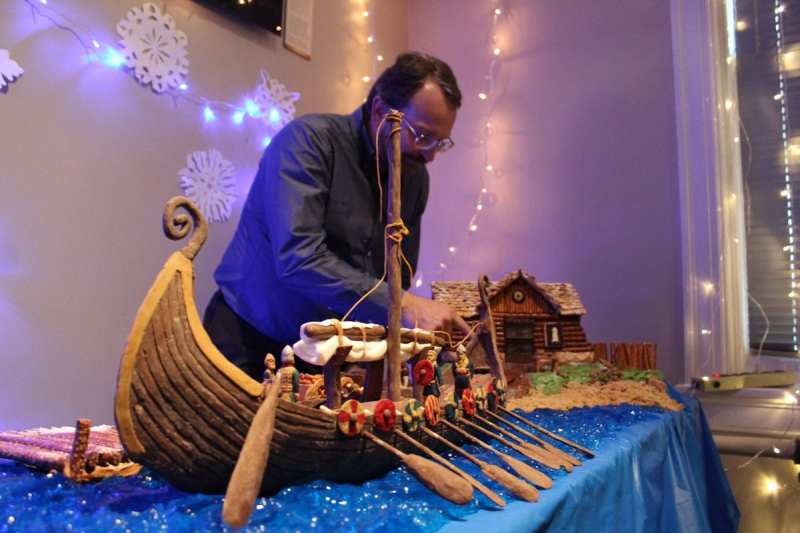 Every year the anthropology department at the Smithsonian’s National Museum of Natural History has a holiday party, and every year we wait with baited breathe to see what new creation master cake baker and archaeologist Eric Hollinger will unveil.  This year’s impressive creation, a 29” chocolate Viking Ship, is modeled after the Oseberg Ship from Norway.  Accompanying the ship are a Viking longhouse made of cake, a pretzel dock, and a jello ocean!  The ship is manned by four Vikings preparing for a journey, or maybe just returning.

Ships like the Oseberg vessel are rare finds in the archaeological record because wood only preserves under very specific conditions.  The Oseberg Ship was excavated in 1904 by Gabriel Gustafson and is one of the best preserved examples of Viking Age ship construction that exists.  The 71’ vessel was made of oak, unlike our chocolate replica, and would have carried 30 oarsmen when it was fully manned. Given the impeccable construction, and elaborate decoration of the vessel, it is likely that the ship belonged to a very important member of society. 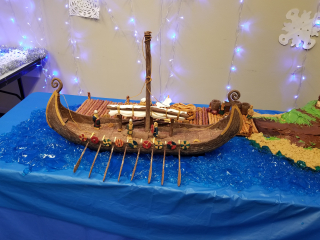 In addition to the ship, archaeologists uncovered a wealth of grave goods in the vessel.  There were five intricately carved wooden animal head figurines, four decorative sleighs, an ornately carved wooden cart, textiles including imported silk, a bed, parts of looms for weaving, skeletal remains o at least 18 different animals, and many more practical objects for day to day living.  These extravagant grave goods further the belief that the individuals interred in the boat were from the higher echelons of society.

The identity of the two women from the Oseberg burial has been debated for over a century.  Archaeologists know that the women were buried during the summer of 834 AD and that the burial was broken into a little more than a century later, during the reign of Harald Bluetooth.  As a result, the remains of the two women were scattered around the burial chamber, and many objects may have been removed from the burial in antiquity.  Archaeologists have speculated that the two women may have been Völva, female seers in Norse religion, or that one of them may be Queen Asa, or that they were important political and social figures whose names have been lost through the millennia between their burial and rediscovery.

This burial has been regarded as somewhat of an anomaly for the century that modern scholars have known about it.  The common assumption has been the Viking Society was male dominated but the Oseberg burial is the richest Viking Age burial ever found, and contained two women.  So what do scholars make of evidence that doesn’t fit the prevailing theory?  We revise our theories of course!  Recent DNA analysis of the skeleton in a ‘typical’ and wealthy warrior’s burial at Birka in Sweden has revealed that the skeleton in the grave was actually a women.  This study, as well as others that are currently underway, help us to reassess the past and learn more about century old discoveries that still have secrets to unlock.  Regardless of whether we ever learn their names, these women and their burial have fascinated archaeologists for more than a century, and continue to inspire analysis and the creation of impressive and delicious desserts!