It’s hard to believe it’s already 2018! We’ve had a very busy year with some really incredible highlights. The year started with some of our staff attending the second set of NSF-sponsored workshops exploring the idea of an Arctic Digital Library to increase access to Arctic archival collections. These meetings were followed by a whirl of activity that culminated in two events in April. We invited two scholars from Alaska, Rhonda Sparks and Hannah Voorhees, to present at our annual Ernest “Tiger” Burch Memorial Lecture. Their talk on climate change and indigenous understanding of human-polar bear relationships was particularly well attended. 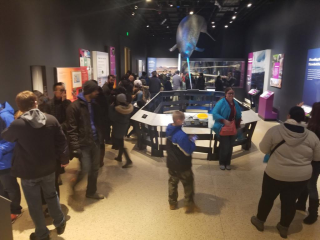 A look at our Narwhal exhibit.

Earlier in April we launched a new series of blogs which highlights the amazing objects in our collection. We’re working with the Emily Cain and Haley Bryant from Circumpolar Ethnology Imaging Project to showcase some of our favorite items in the collection. Over the past year almost 2,500 object records in our Arctic Ethnology collection have been digitized and made available to the public! As part of our desire to increase digital access to Arctic collections, Igor Krupnik, Nicholas Parlato and Chelsi Slotten attended and presented on the state of collection digitization in the Arctic at ICASS IX in Umea.

Around the same time, our Alaska Office released two new free educational resources through our Sharing Knowledge Alaska initiative. The new interdisciplinary curricula helps students learn about Alaska Native peoples, including traditional knowledge, subsistence practices, languages and values. We were also thrilled to have Dr. Aron Crowell, director of the Alaska Office, talk about his experience of dialogues with indigenous scholars, artist and educators in their communities and at the museum. In Alaska local artists participated in a moose hide tanning and sewing residency that culminated in several public programs and a workshop. 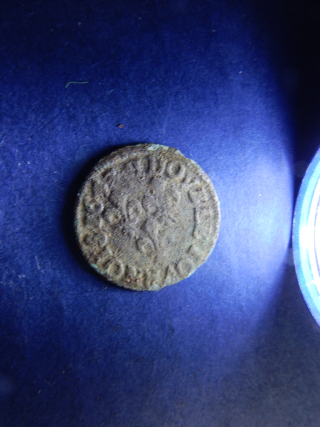 A 1630's French coin from an Inuit site in Quebec.

Back on the east coast, Bill Fitzhugh went on his annual research expedition to Quebec and Labrador. One of the most exciting finds of the summer was a French coin from the 1630’s which helped to date the Inuit site we have been excavating in Quebec. The students on the trip also got to spend some quality time as Norse re-enactors at the L’Anse aux Meadows Viking site while waiting for suitable weather for boat traveling. Bill’s research trip had a slight interruption when he returned to DC for the opening of our newest exhibit, Narwhal: Revealing an Arctic Legend, which runs through early 2019. The exhibit and its companion volume are already very popular as the narwhal has a somewhat legendary status and is referred to as the “unicorn of the sea.” In fact, the unicorn myth is based on information on narwhals that came to Europe via Greenland Vikings!

We were also fortunate enough to acquire a large new collection item this summer. Stephan Loring and Igor Krupnik helped with the acquisition and transport of a 28-foot Siberian Yupik Angyapik, also known as an Umiak in North Alaska, from St. Lawrence Island. The traditional skin boat is over 50 years old and is part of a disappearing tradition as more and more boats of this type are now made with synthetic materials. 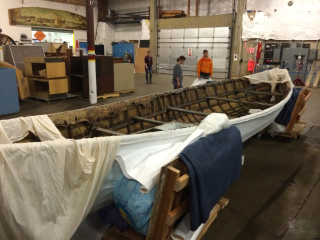 This year has been filled with collaborations, educational outreach, an exciting new exhibit, new projects, and progress towards understanding the amazing changes underway in the Arctic. We are, as always, excited to continue to learn and ready to face whatever the New Year brings—one of those things will be our forthcoming books on Arctic Animal Crashes and a compendium on Canoes and Kayaks of the Eurasian North. Wishing you all the best from all of us here. Happy New Years!