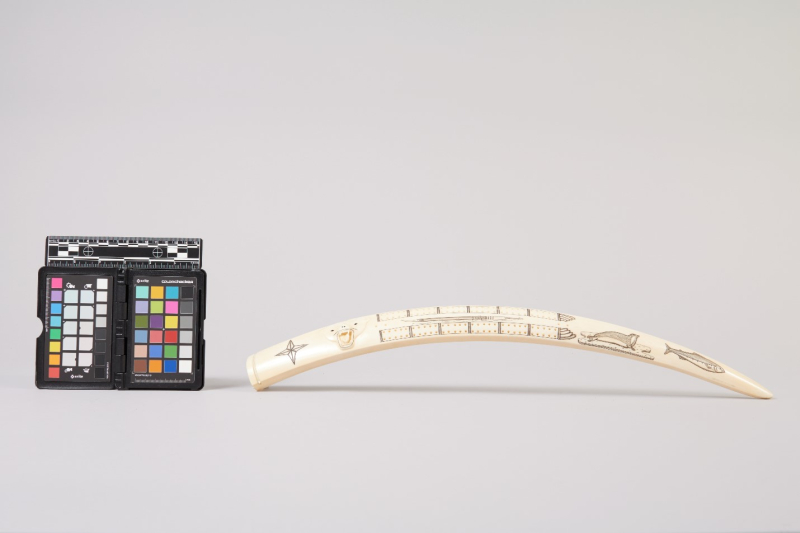 This object was collected by Dr. Aleš Hrdlička, the founder of the American Journal of Physical Anthropology, near King Island, Alaska, and was accessioned into the museum in 1926. This object is affiliated with the Inupiat (Eskimo) Alaska Native group. It is 53 cm long and 4.5 cm wide. It is made from walrus tusk with scrimshaw depictions of a kayak, seals, and a bear’s head relief at the end. There are four rows of small round holes on the surface that would have held ivory pegs which would be used to keep score during the card game, cribbage. There is also a small ivory peg that keeps the tusk upright during play.

If you want to see more of scrimshaw designs on the cribbage board check out the other images taken by our photographer! 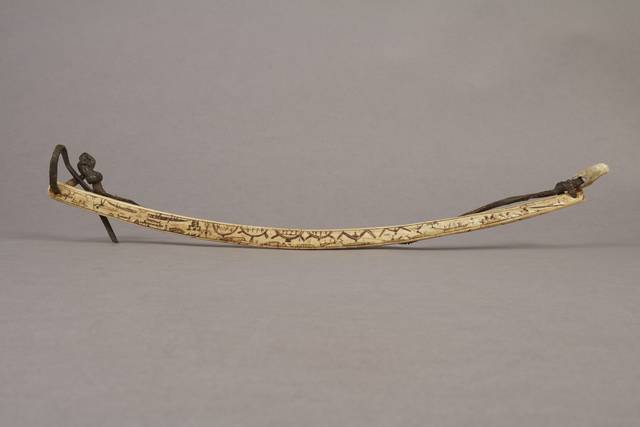 Bow drills are a practical object; they allow the user to harness friction to drill holes or start fires. This “toy” version was collected by Edward Nelson at St. Michael in Norton Sound, Alaska, and came to the museum in 1878. It may have been used by children to practice motor skills, but it is also covered with etched and inlaid images! Click here to see more detailed photographs of the artwork, which includes walruses, people, and seafaring vessels. If you’re interested in tools like this one, try searching for more bow drills using the Anthropology Collections Search online. They come from all over the world, in a variety of styles and materials. 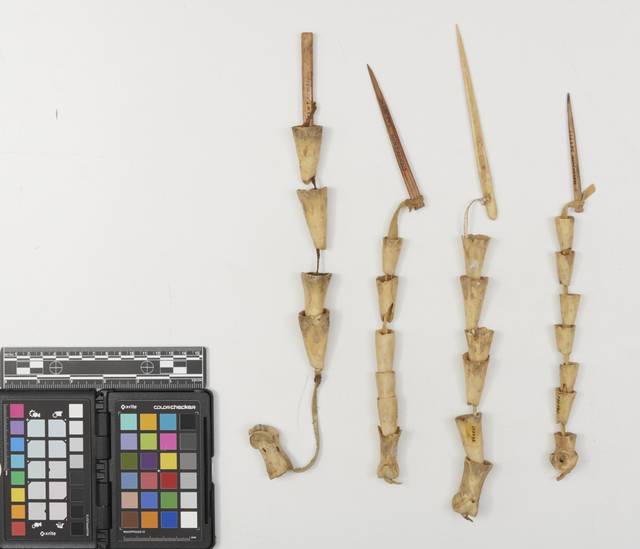 How would you play with this toy? This game, “Tapaga ‘Towan”, is called both a “Ring-and-Pin game” and a “Cup-and-Pin game” in our records.  It was played by tossing the cups in the air and trying to catch them on the pin.   It is made out of fibers of dressed skin, and what look like small cups carved out of ivory. Associated with the Montagnais people, it was collected by Rev. John M. Cooper near James Bay, Quebec, and accessioned by the museum on the 6th of July, 1956. 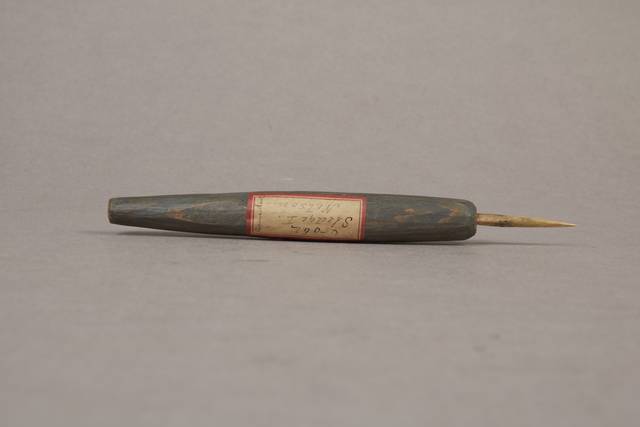 This dart was used as part of a game. According to our catalogue information, boys and men would set up a series of stakes at which they would throw these darts, attempting to knock them down. The person who was able to take down the most stakes would win the pile of stakes and barbs. This particular dart was collected near Sledge Island in the Norton Sound, AK by Edward Nelson and accessioned by the museum in 1880. 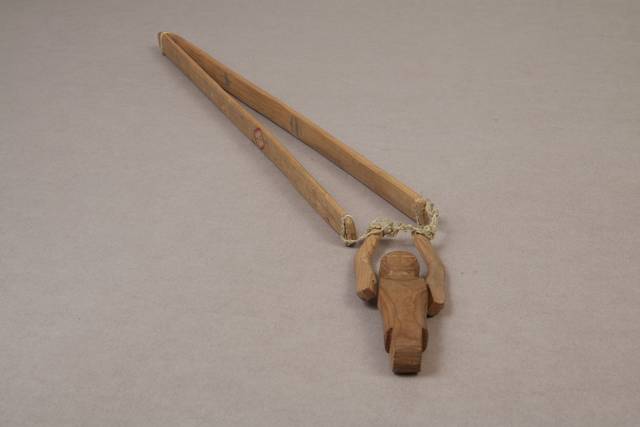 This delicate wooden object is a child’s game described in the catalogue information as a “Jumping-Jack”, made of carved wood and rope made of sinew, gut, or baleen. You can make Jack jump by pulling apart the two long handles and bringing them back together quickly to make the small carved figure in the middle turn flips,.  This toy was accessioned on 27th January, 1910 and was donated by the U.S. Department of the Interior. 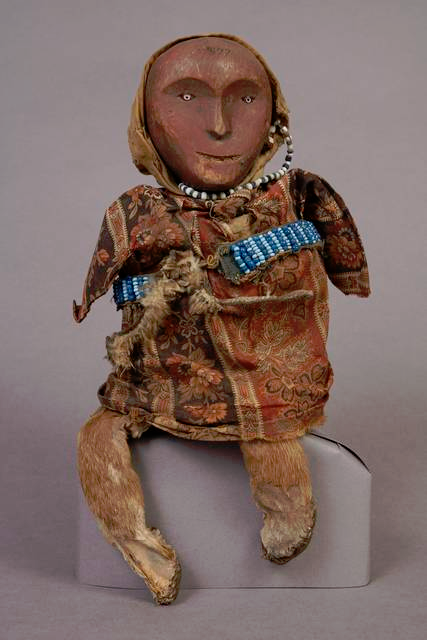 This very beautiful doll was collected by Edward Nelson in Kaialigamut in the Kuskokwim Delta and accessioned in 1879. It is impressively carved and beautifully adorned in a small outfit of calico and fur that is also intricately beaded. The dolls in our circumpolar collections vary greatly in size and style! 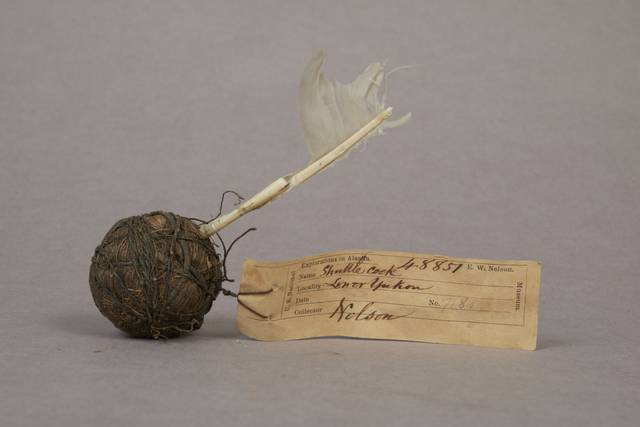 This item from our collections perhaps seems unfamiliar at first, but if you take a closer look you might recognize a familiar object.  It’s a shuttlecock! Shuttlecocks, also referred to as “birdies”, are what get batted back and forth during a game of badminton. This shuttlecock has a head made of wound fibers, which serves as a weight, and a tail of feathers. The feathers, traditionally taken from only one wing of a bird, help keep the shuttlecock aerodynamic. These days we tend to use commercially manufactured plastic and rubber shuttlecocks. This object was donated by Edward Nelson, accessioned on Feb 9th, 1882, and collected near the Lower Yukon River. 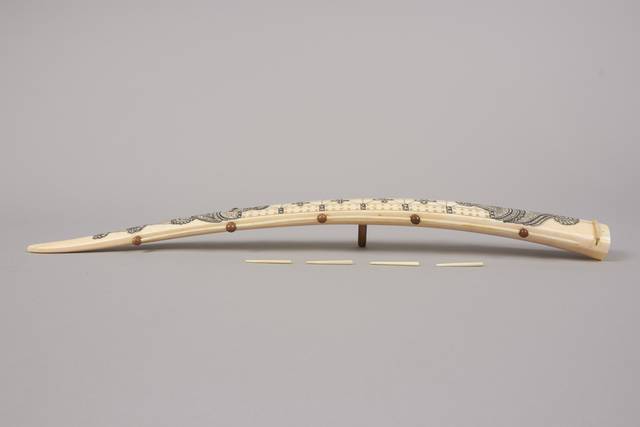 This cribbage board, made from a single walrus tusk, is beautifully decorated with scrimshaw—carving on whale bone or ivory which is colored with pigment! Cribbage, a card game invented in the 1600s, is historically a British invention and pastime, though it found its way to American shores on board ships throughout the later 19th and early 20th centuries alongside explorers and colonialists. Embellished boards such as this one, which are used to keep score, were likely made by Alaskan natives for sale to non-natives, as a market for tourist goods blossomed with the arrival of Europeans the late 1800s.

Although the history of the game is long, and scrimshaw was originally done on whaling ships beginning in the mid 1700’s, our cribbage board was collected from St. Lawrence Island by Mr. Edward D. Jones and accessioned into the museum in 1957. If you take a closer look at the detail images taken by our photographer, you can see the holes for the score keeping pegs (“spilikins”) evenly placed among the intricate scrimshaw work.