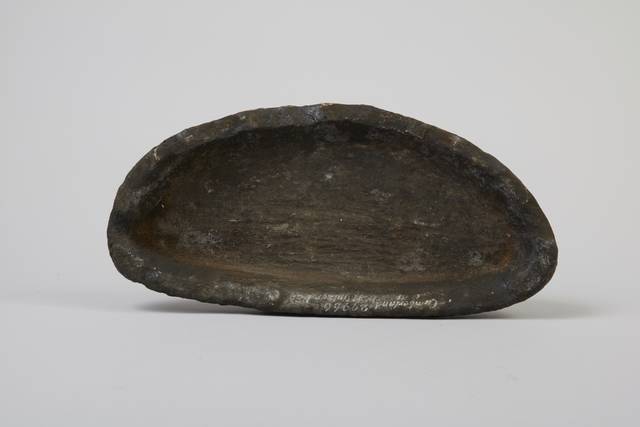 This qulliq/kudlik (oil lamp) affiliated with the Inuit Native group from Baffin Island, Nunavut was collected and donated by Lt. William A. Mintzer, and accessioned into the museum in 1876. Blubber would be pounded up in the concave part of the stone to access the oil and some sort of moss or other plant matter would be placed along the edge of the stone as a wick that would be lit with flint. It was usually the woman’s job to tend to the lamp to provide continuous light and heat to the home during the cold, dark winter. 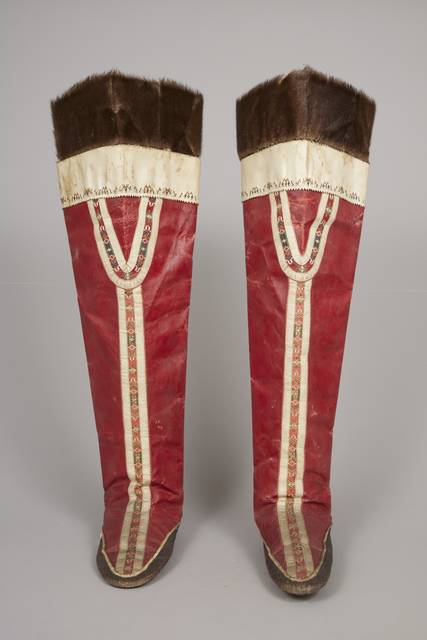 These Kamiks (boots) and removable socks are affiliated with the Western Greenland Inuit Native group. The boots are made of red and white depilated sealskin (skin with the hair removed), with brown sealskin soles, and the socks are made of sealskin with fur on the inside. At some point, the brown fur cuffs above the white cuffs on the boots were removed from the socks and attached there. The beautiful embroidery seen on these boots is a method known a avigtat embroidery, invented by the Inuit of Greenland. This method is done by sewing tiny pieces of dyed skin into patterns. This style of Kamiks is referenced in The Art of Greenland by Bodil Kaalund which explains that long, red boots with this style of embroidery up the shin and around the knee were made for women getting married (147).  The Kamiks measure 58 & 57 cm in height and the soles measure 23 & 21 cm in length. They were collected and donated by Paul Oscanyan in 1927-1928. 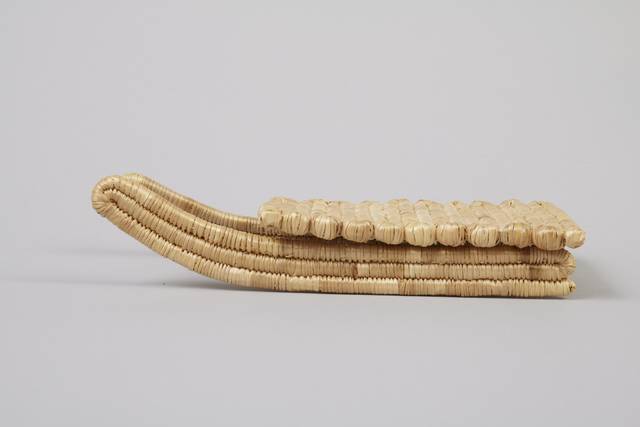 This object is affiliated with the Inuit Native group in Labrador, Canada. It was created by Garmel Riche, who is originally from Bluff Head Cove, Newfoundland and Labrador, in 1986-1987. It is a work of basketry using the coiling technique, and sewing, made from beach grass with brass wire runners wrapped in grass. One of the runners has broken off. The sled is 15.5 cm long, 6.8 cm wide, and 3.0 cm tall. Sarah Baikie collected it from Rigolet, Labrador and donated it to the museum where it was accessioned on December 1, 1989.

The Alaska office of the Smithsonian Arctic Studies Center at the Anchorage Museum has completed a new YouTube channel, presenting videos from its programs, where you can learn from Alaska Native elders, culture bearers and artists about their languages, arts and lifeways.

This mat is affiliated with the Western Greenland Inuit Native group and was collected in 1927-1928 by Paul Oscanyan on the west coast of Greenland. A young, unnamed Inuit girl made and gifted it to Oscanyan in gratitude for him teaching her brother navigation. The mat is made of cotton string, beaded with small glass beads and has a diameter of 20.3 cm. Native Greenlanders have used beading as decoration for centuries using natural materials such as bone until the introduction of glass beads by Europeans.

The Art and Science of Celestial Navigation Across the Smithsonian Universe 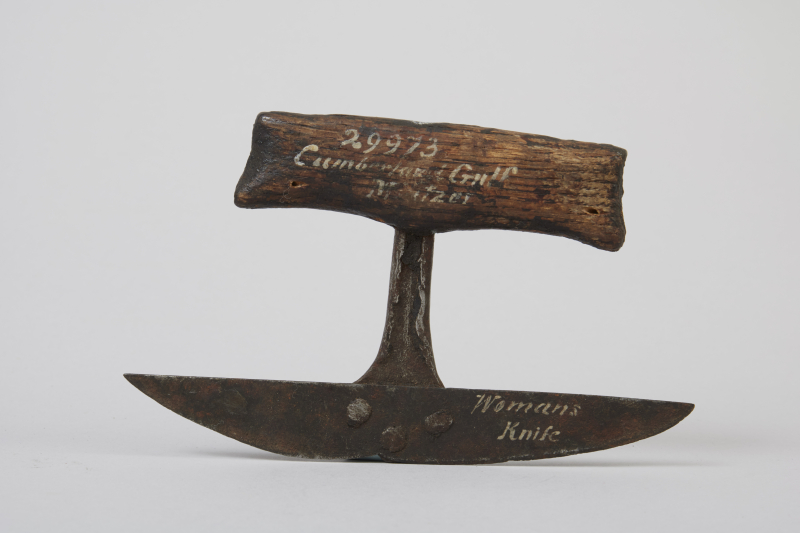 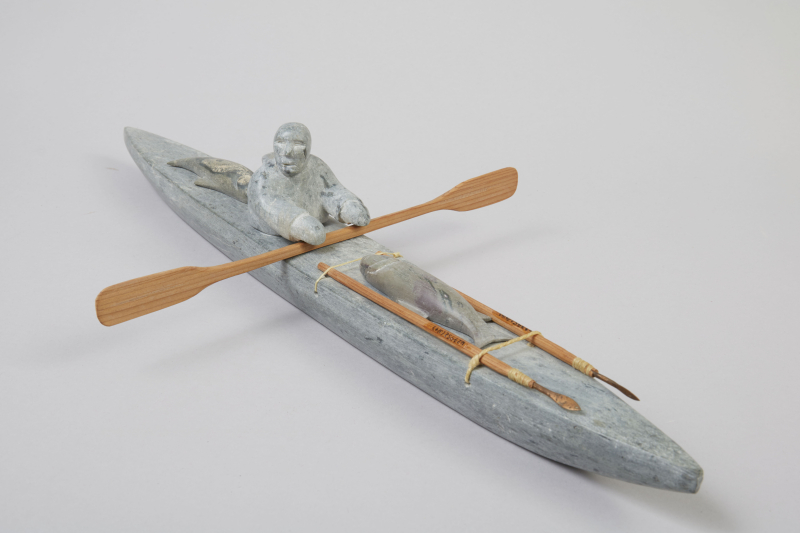 The Circumpolar Ethnology Imaging Project (CEIP), now in its third year, has successfully digitized nearly 50% of the vast Arctic and Subarctic ethnological collections in the Department of Anthropology at the National Museum of Natural History. Starting this month, we are photographing objects from Nunavut, the largest and northernmost Territory of Canada. Throughout this process, we have the privilege of collaborating with the Government of Nunavut to publicize and promote this portion of our work, and make these collections more accessible to the people of Nunavut and beyond. Each week while we are working through these collections, we will highlight an object from Nunavut. To kick off this collaboration, Krista Ulujuk Zawadski, Curator of Inuit Art for the Government of Nunavut, discusses why collections digitization efforts, such as the CEIP, are so important for the Inuit community in Nunavut and across the Arctic. Posts will be made available in Inuktitut, Innuinaqtun, English, and French both directly on this blog and through the Government of Nunavut’s social media platforms.

Connecting people across the vast Arctic has always been a challenge. Despite a vast geographical expanse, Inuit have stayed connected through oral traditions, language, and cultural customs and more contemporarily through media and technology. Taking advantage of technology and media today we are able to bond people across the Arctic and throughout the globe, but by a much faster means and a more comprehensive manner than previously. Where, in the past, Inuit shared news and stories through oral traditions such as those shared in a qaggiq (a large iglu where drum dances and stories occurred), today we continue to share the same type of news and oral histories through different mediums. Where, in the past, Inuit traveled across the land on foot, with dog teams, and boats and qajait (singular: qajaq) to connect with other families and peoples, today we travel through air and through the internet, fostering a language of images and symbols in the context of the digital.

Digitization is a significant step in connecting people, complementing the already existent connections that have been maintained through generations of oral traditions and histories, but now also reaching people beyond the Arctic. Where there are significant challenges in accessing museums and museum collections from the Arctic, especially in Nunavut where there is no large museum, digitization bridges a gap, allowing Inuit – and others around the world – to have access digitally to our own Inuit cultural heritage, often connecting us with belongings that may still remain in our living memory through our oral traditions. Re-connecting with belongings that may have been made by one’s own great-grandparent is a thrilling and emotionally intense moment when accessing collections and is an integral hope in the links digitization seeks to strengthen.

The role of the Government of Nunavut’s Department of Culture and Heritage in the process of digitization is to promote the work of the Smithsonian Institution’s significant movement in fostering connections between people and the belongings in its collections. Our department believes it is important to inform Nunavummiut (people of Nunavut) that belongings from Nunavut are now available to view online, which will benefit all Nunavummiut by enriching the traditional knowledge we already hold as Inuit. As the Curator of Inuit Art, I have personally experienced the power of accessing museum collections and felt the emotion of being near my ancestors through belongings and am excited to see Inuit belongings become available to many through digitization.

Begin exploring the Arctic and Subarctic materials at the Smithsonian by clicking here.

This object was donated by Dr. John Cooper at the Catholic University of America and acquired by the museum in 1956. The bone flesher was a gift of Mrs. Geo. Rbt Norn in 1931 and was collected from Ft. Resolution near the shore of Great Slave Lake in the Northwest Territories of Canada.  This bone flesher is affiliated with the Chipewyan, an Athapaskan-speaking Canada Native group. It is made from a section of moose leg bone, with the distal end cut into a finely serrated chisel edge and is approximately 12.5” long and 1” wide. This bone flesher would have been used to process animal hide to remove a thin layer of fat and flesh prior to the tanning process. The proximal condyle is wrapped in hide with a loop handle to provide a better grip for using the tool and the beveled end would have removed the residual flesh and fat. This step in processing is crucial in preparing a hide. If the hide was not prepared properly the uncured leather or fur could become rancid.